Save Files
* (Fix) Forgot to uncomment out the “Save Containers + Player Blocks” code which had been commented for testing.

Game Items
* (Change) Instead of using a bunch of fields for referencing, used just one as a pointer to whatever kind of class instance it is.

Loading
* (Fix) Containers, Doors and Campfires were not being loaded into the game (well, they were trying, via an old function, looking for a non-existent file).

Player and Game Start Windows
* (Update) When deleting a Player or Game World, removes the new physical data files (when Player deleted, has to remove any child Game World files).

** NEW PLAYER AND GAME REQUIRED FOR THIS BUILD **

File Structures
* (Change) All memory files have had their prefixes changed, removing the “mem”. Is now redundant (because all files will be memory, no more tps).
* (Change) Game, Player and Region files changed from tps to memory.

Save Files
* (Change) Big change. There are now two types of save game files. Player and Game. Basically, Player info kept in the Player file, and Game World info kept in the Game file.
* (Add) Save files are encrypted.

Terrain
* (Add) Grass added to the “Surrounding blocks” logic on harvesting a block.

Map
* (Fix) The changes to the Region file structure and logic (Alpha 37) meant that the Map logic also had to change (but didn’t, until now!).

Sentients
* (Change) When re-populating the Sentients, the code now adds:
(Current Total + 1) TO Random Ceiling Total Sentients
– didn’t use to have the +1.
– Can’t see how this will solve the “slow game” problem, will keep looking.

Containers
* (Add/Update) Containers (Wooden Chests at the moment) are in and working. You can transfer (drag n drop) between Inventory and Chest (and the other way around).

Recipes
* (Fix) Even though a Recipe could not be made (showing red), there was a chance of a “1” showing (logic thought it could still make one).

Game
* (Fix) The memory files were not being cleared on closing the game window (only when the main window was closed down). Now, when the game is disposed, the memory files are scoured clean also. Fixes some wierd stuff with Recipes and wotnot when you load a game again from the main screen.

** NEW GAME REQUIRED FOR THIS BUILD **
– Recommended that you start a new Player also. 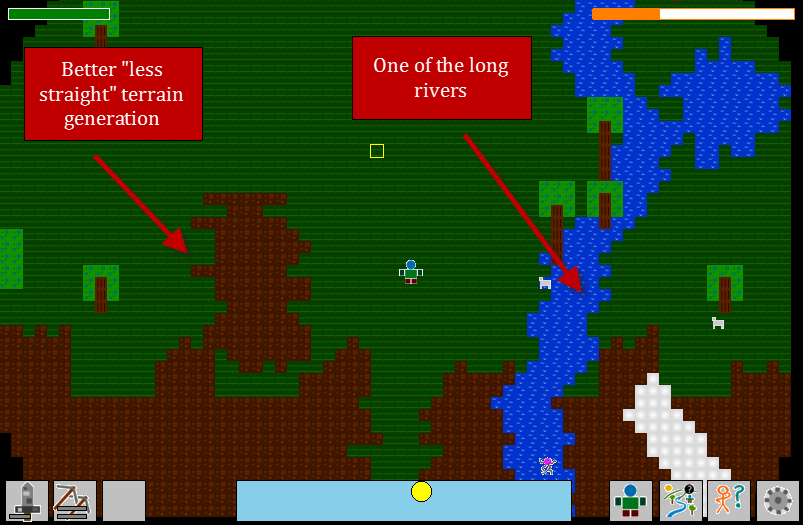 The World
* (Fix) The Player (that’s you!) could get stuck at the edges of the world.

Day/Night Cycle
* (Fix) In the code that removed the Sheep at night, the delete call was trying to delete from the BadSnail queue rather than the Snail queue (copy paste and didn’t change it).

Interaction
* (Fix) When you click on a Waypoint, you no longer “action” (arms waving about).

Terrain
* (Add) Rivers! The world will now have a small number of rivers traversing from top to bottom and left to right.
* (Add) BIG NEWS .. The world you start a game with is now saved and loaded! That is, the world no longer randomly generates each time you load it.
* (Add) The sides of the Regions are now “noisy”, or “not straight lines”.

Regions
* (Fix) When using waypoints, the incorrect Region record (for another Game!) could be chosen.
* (Update) “Order” field added to the Region file, so that for each Game, the Regions have a set order, across then down (x then y).

Waypoints
* (Fix) Some significant issues arising out of the new “Order” field above in Regions meant that a bit of dodgy Waypoint code was revealed. Basically was not filtering by Game, was just getting the first record in the file (if you had multiple Games, big problem).

Game
* (Fix) On exiting a game and then loading a game (without leaving the main game window), the Image Cache group was not being cleared, and would result in a GPF.