Because of the work done on the “Item” section of the game engine, you will want to start a new Player for this build. 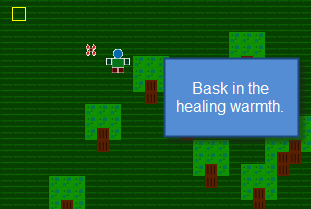 Classes
* (Update) Weapon and Item classes are now implemented and the class attributes (Damage and Power) used in calculating how much damage is done and the power of a tool.

Installer
* (Add) You can now choose whether to add Desktop, Quick Launch and Program Files shortcuts.

Items
* (Update) The Item system has been upgraded to allow for Attributes. This was a big increase in the complexity of the engine (for the better).

Weapon Equipping
* (Update) Weapons can now be dragged onto the Weapon slots (previously was only double-clicking in the Inventory that allowed weapons to be equipped).

Pinkeyes
* (Fix) Damage caused was positive (so actually healed you) rather than negative.
* (Change) Pinkeyes will flee you when their damage gets below 30%.
* (Change) Base Pinkeye health increased from 5 to 8.

Weapons
* (Add) The humble Flyswat is now a weapon! It has the lowest damage of all weapons at 1 (well, there are only two weapons, but more on the way!). 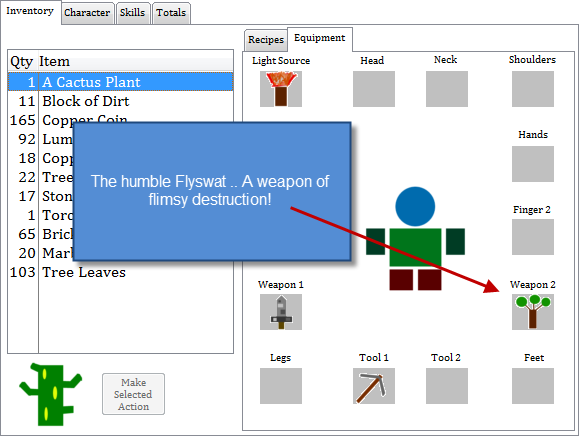 The Flyswat is now the first weapon you can wield!

Sheep
* (Change) Sheep will now flee you when you hit them.
* (Change) Sheep now drop coins (a very small amount, between 1-3 75% of the time) on dying. They probably ingest the coins while partaking of christmas pudding. 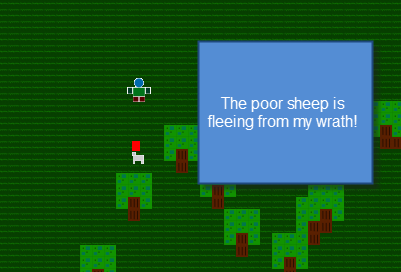 Sheep run away fast when you hit them.

Mob Movement
— “Sentients” is starting to sound really try-hard. “Mob” is much better .. mmmm. Mob. —
* (Change) For each movement state (Random, Follow, Flee) there are different speeds for each mob type.

Player Action
* (Update) Weapons and Tools are now displayed in-game when using them. 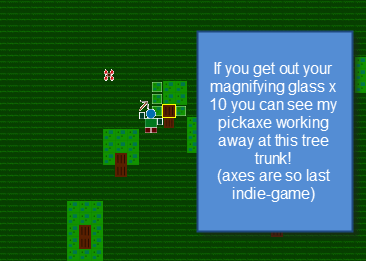 Your Tools and Weapons now show as you use them.